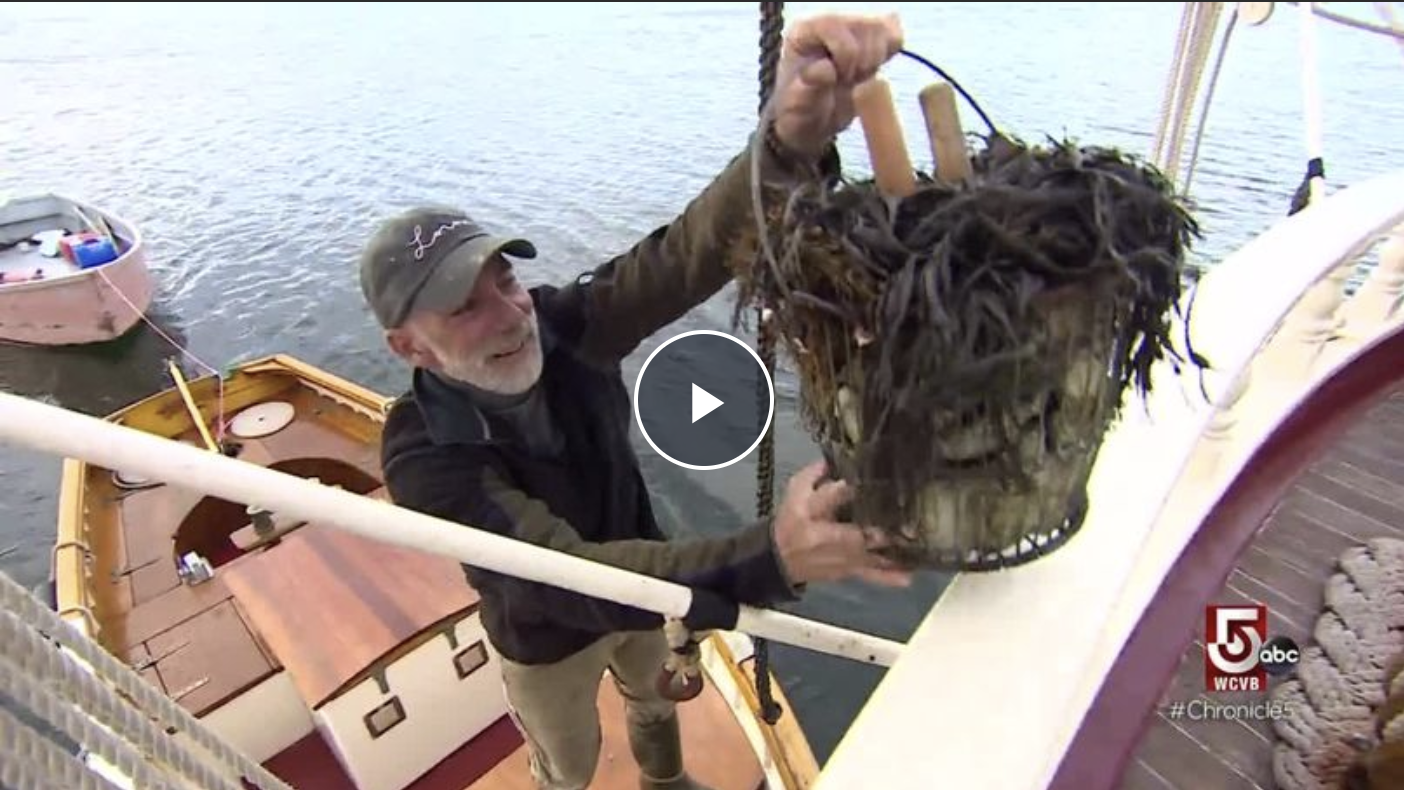 10/19/20 – “Adam Campbell’s North Haven Oysters have been praised by culinary legend Jacques Pépin and featured in the James Beard Award winning restaurant The French Laundry. A documentary, by GoodFight Media, about Campbell was made in 2018 as part of a Maine Coast Harvest campaign to highlight aquaculture. The Maine Coastal Islands National Wildlife Refuge is a vital collection of over 60 protected islands that shelter and allow monitoring of many rare and at-risk birds and wildlife. The refuge is run by the U.S. Fish & Wildlife Service, which also maintains historic lighthouses in the area.” 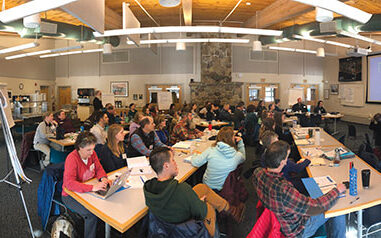 10/7/20 – “One of the biggest challenges for educators is getting students to fully engage in the subject matter being studied. Place-based learning has thus emerged as an educational philosophy to enhance student engagement with issues in their own communities. In Maine, where aquaculture is growing as wild fisheries decline, bringing aquaculture into the classroom will help students understand what’s going on in their communities, believes Morgan Cuthbert, a seventh-grade science teacher at Frank H. Harrison Middle School in Yarmouth, Maine. In 2019, Cuthbert started an initiative called, Aquaculture me!”, to help other educators in Maine integrate aquaculture into their curriculum.” 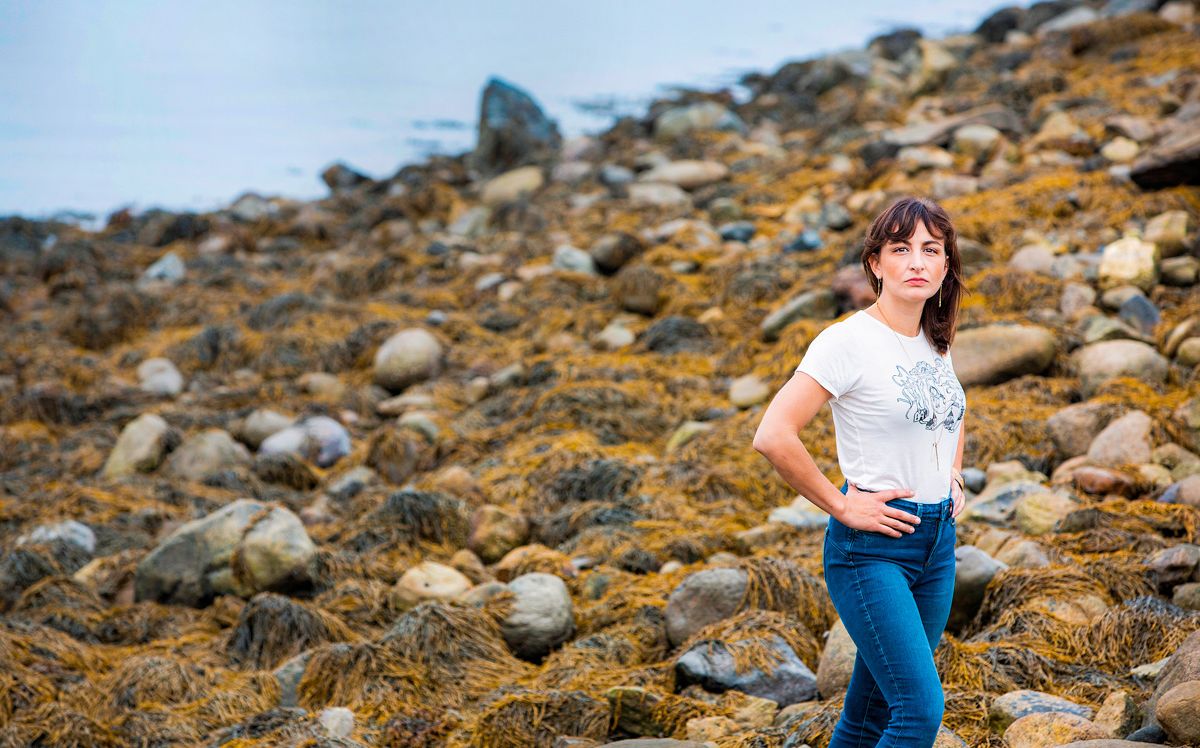 MaineBiz Next List: Briana Warner made kelp tasty — and by January it will be in 700 stores

10/5/20  – “As CEO of Saco kelp processor Atlantic Sea Farms, Briana Warner has overseen its rapid growth and retail expansion. This year working with 27 “partner-farmers,” the company harvested 450,000 pounds of kelp, up from 240,000 pounds and 24 partner-farmers in 2019. The 2021 goal is 800,000 pounds. Typically, the harvest is packaged frozen, pureed and fermented for wholesale food service. This year, the pandemic decimated wholesale markets, so the company raised a convertible note round to accelerate expansion of its retail line, developed last year, from 160 locations to over 700 by January.” 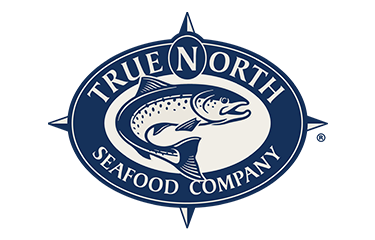 9/24/20 – “It all began in 1985 with one family, one farm, and 5,000 salmon. Thirty-five years later, vertically-integrated corporation Cooke Aquaculture, headquartered in Blacks Harbour, New Brunswick, Canada, and a collective of other Cooke family companies together comprise one of the world’s largest seafood enterprises. A business of such magnitude approaches sustainable development in a variety of ways. For instance, when it comes to certifying its True North Seafood products, Cooke has earned vetting from an array of third-party providers of some of the industry’s most stringent standards.” 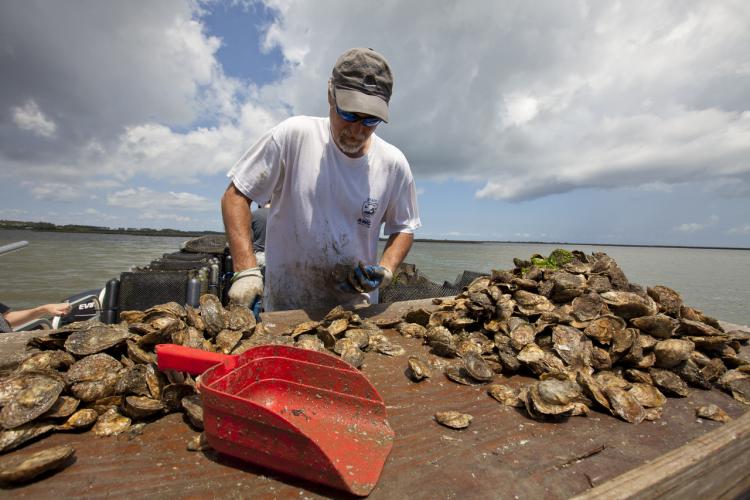 9/22/20 – “This week NOAA Fisheries and our partners will celebrate National Aquaculture Week. NOAA Fisheries and its predecessor agencies have been involved in aquaculture for more than 125 years, pioneering fish culture methods and stock enhancement techniques to replenish wild stocks. Many culture, hatching, and rearing techniques currently used by the industry worldwide were developed in NOAA labs, such as the Milford, Connecticut lab for mollusks; the Manchester, Washington, lab for salmon; and the Galveston, Texas lab for shrimp.” 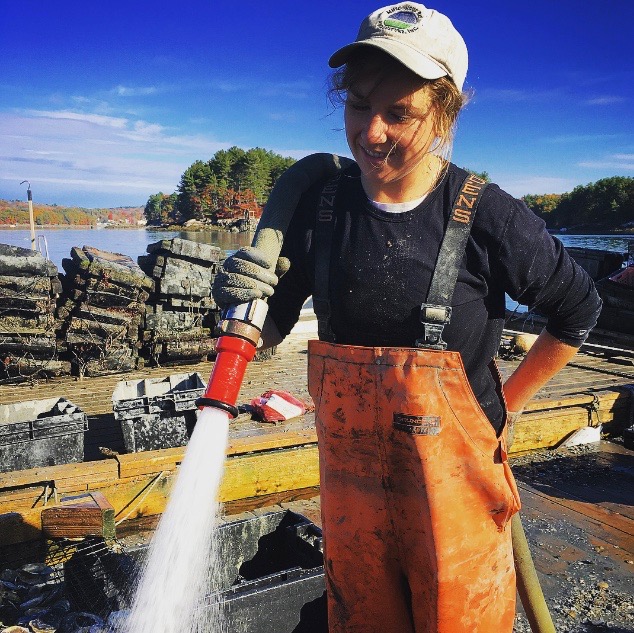 9/21/20 – “Shellfish and seaweed growers in Maine are in line for a new round of federal coronavirus relief funds. Secretary of Agriculture Sonny Perdue says the USDA is expanding the list of producers who can qualify for its Coronavirus Food Assistance Program to include aquaculture businesses nationwide. The executive director of the Maine Aquaculture Association, Sebastian Belle, says the state’s growing aquaculture sector missed out on the program’s initial funding, but now can join farmers and ranchers to apply for a share of the latest $14 billion allotment. “The impact on particularly our shellfish growers was so big in the marketplace that we knew particularly some of the new smaller growers were likely not to going survive this. And that’s what really drove our advocacy with the delegation and at the national level with the secretary,” he says. 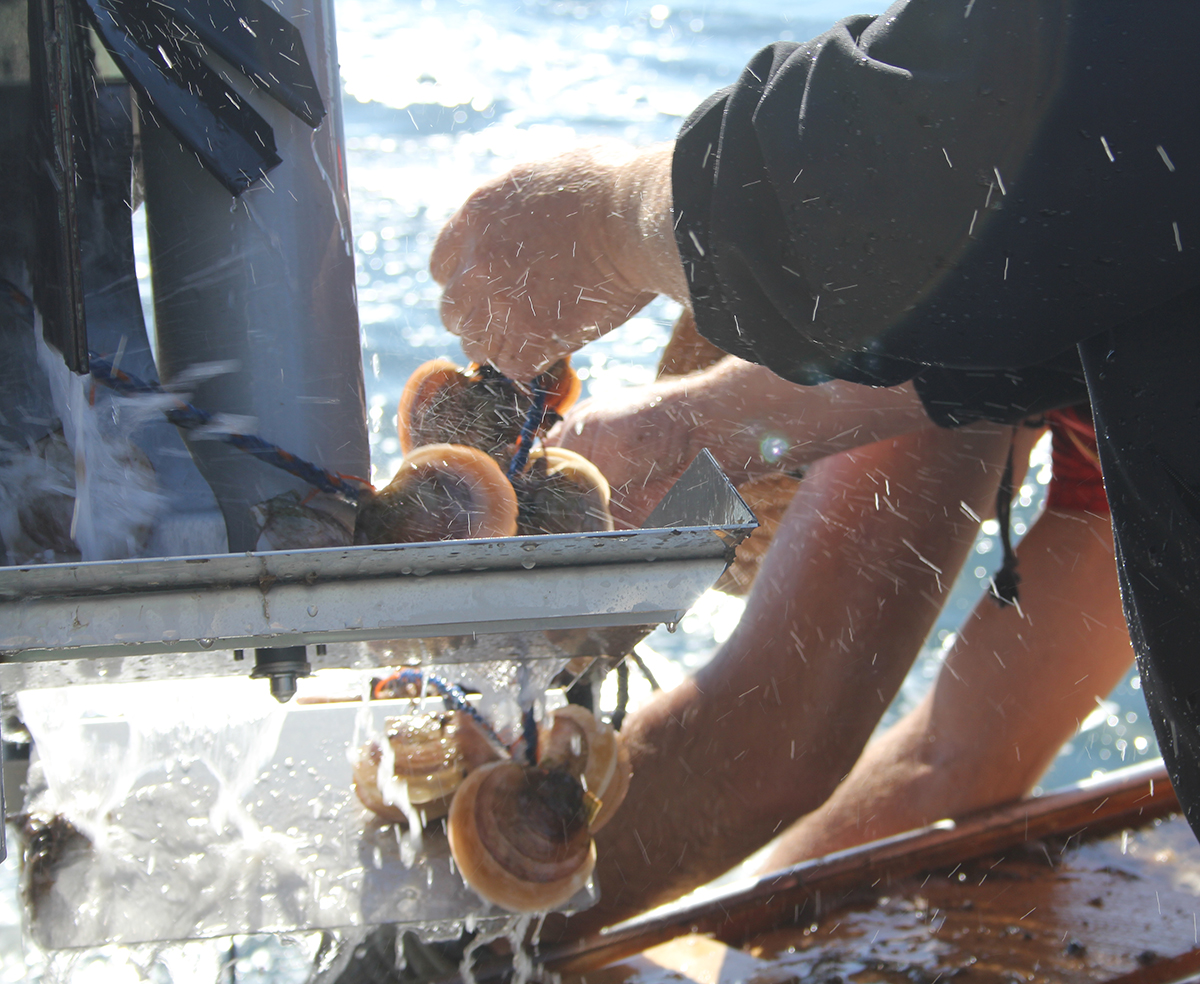 9/21/20 – “In Maine, Atlantic sea scallops (Placopecten magellanicus) are one of the most valuable fisheries in U.S. waters, the target of deep-sea draggers and divers on dayboats. But compared to a seasonal fishery, an aquaculture crop has the key advantage of a year-round supply and steady pricing. In an attempt to build a fledgling scallop farming industry, Maine shellfish farmers started trialling a Japanese technique called ear hanging in 2017. Taking advantage of a sister state agreement with Aomori Prefecture in northern Japan, growers in Maine are working to establish semi-automated commercial aquaculture operations.” 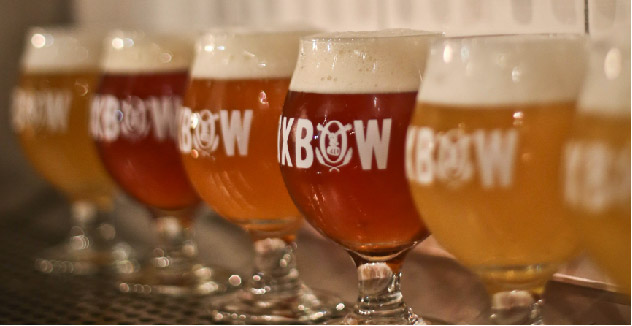 9/15/20 – “Just a few minutes down the road from the entrance of Dodge Point Preserve is a delightful oyster farm; a small sign and flag at the road’s edge are all that indicate where you should turn. Flanking either side of the unpaved driveway are piles of oyster shells and oyster farming equipment… Welcome to Glidden Point Oyster Farm. Just past the parking area is a classic wood barn with the small farm store and onsite dining. There are a limited number of tables, and this place is popular, so be sure to reserve a table in advance. Otherwise, you’ll have to take your oysters to go.” 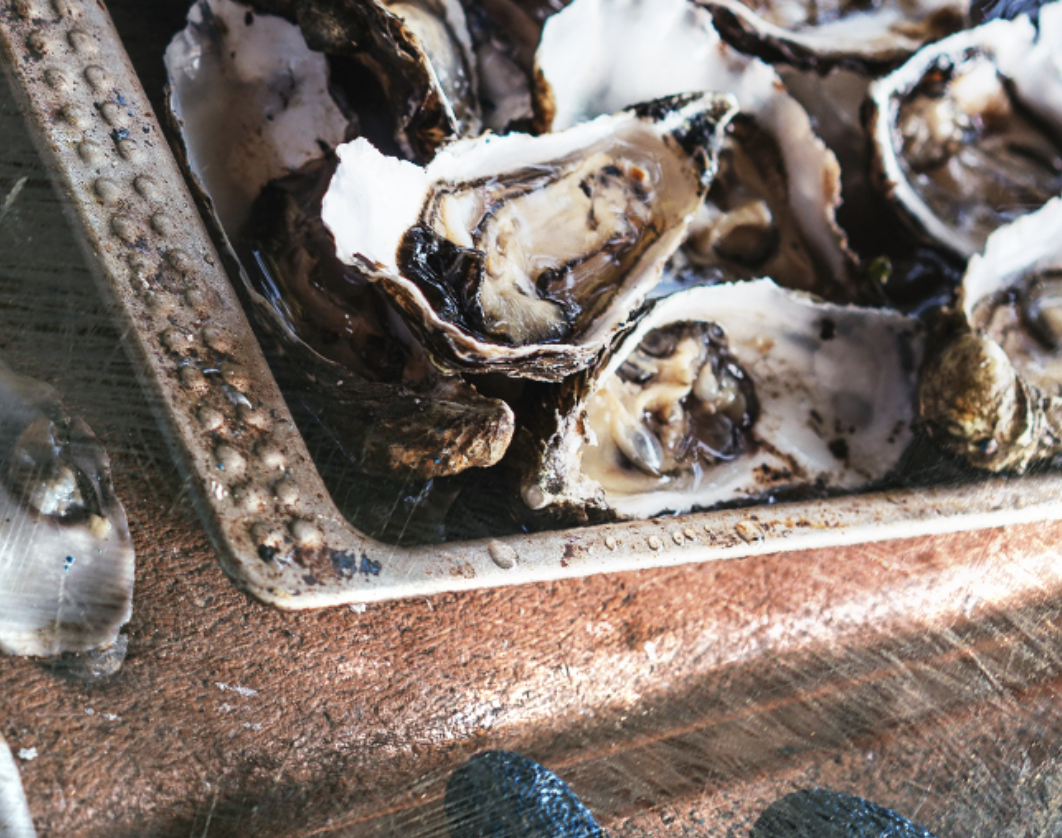 9/14/20 – “With a quarantine cluster full of people who don’t trust shellfish, I was left to my own devices as the sun set on a very weird year in my life. I shucked and slurped down legitimately 30 oysters — each cold, firm, and briny — before I tapped out and passed the whole operation over the fence to our neighbors. They’re not the “self shucking” sort and were delighted. They also now basically perceive me as a survivalist, because after 30 oysters I was able to pretend to have some level of expertise with popping them open.” 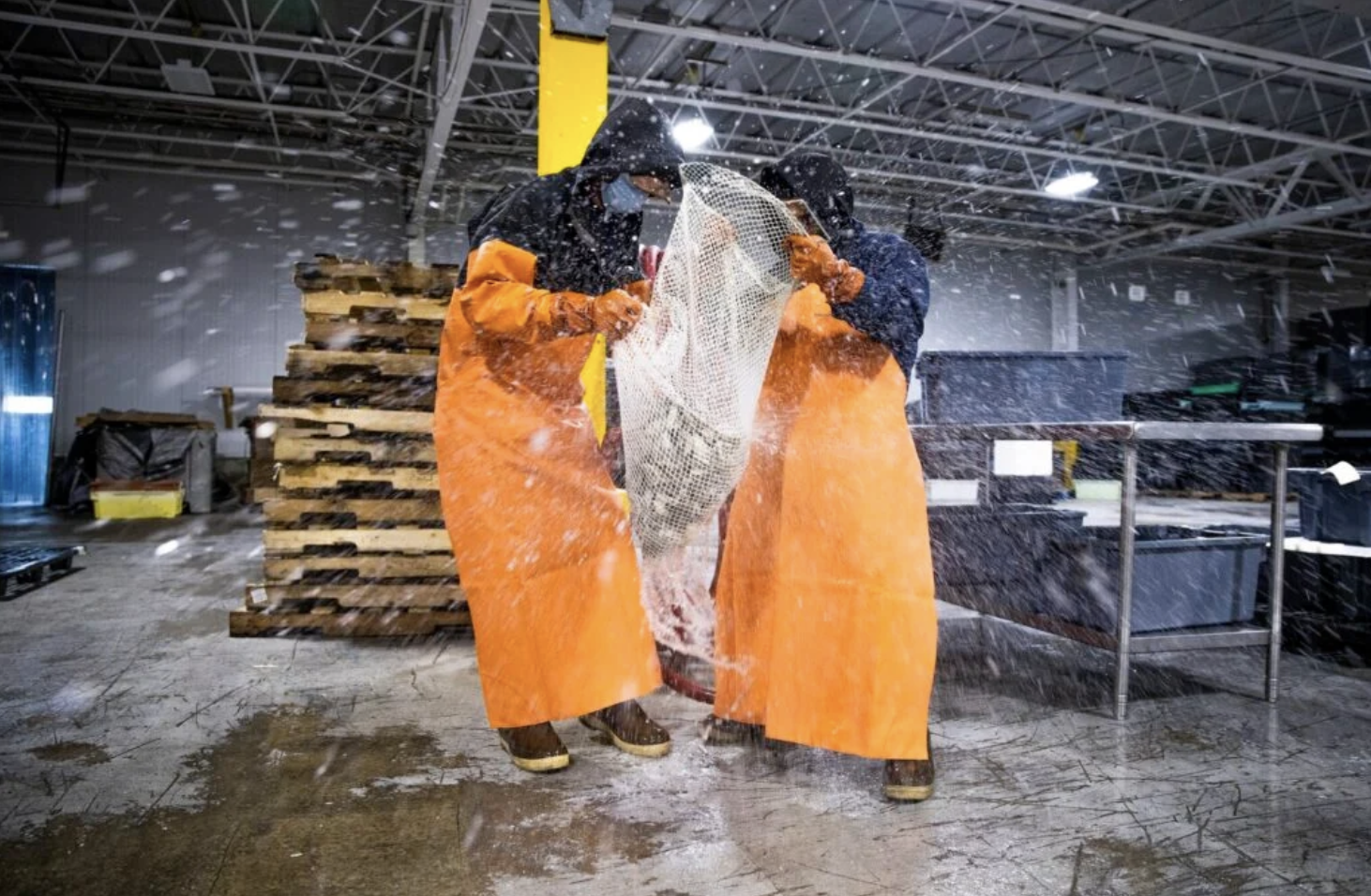 Portland Fish Exchange looks to shore up its future with aquaculture

9/2/20 – “The Portland Fish Exchange is launching a new oyster sorting and bagging operation inside its cold, cavernous auction warehouse in hopes of growing the state’s aquaculture economy and diversifying a business plan that’s taken a beating since local ground fish landings collapsed. On Wednesday, the Exchange received the first of what it hopes will be many oyster deliveries. Two employees measured, sorted, bagged and tagged five 100-count bags of Eastern oysters harvested by Running Tide, a two-year-old aquaculture company that operates a hatchery in Harpswell and grows oysters, clams and scallops at three coastal Maine locations.”