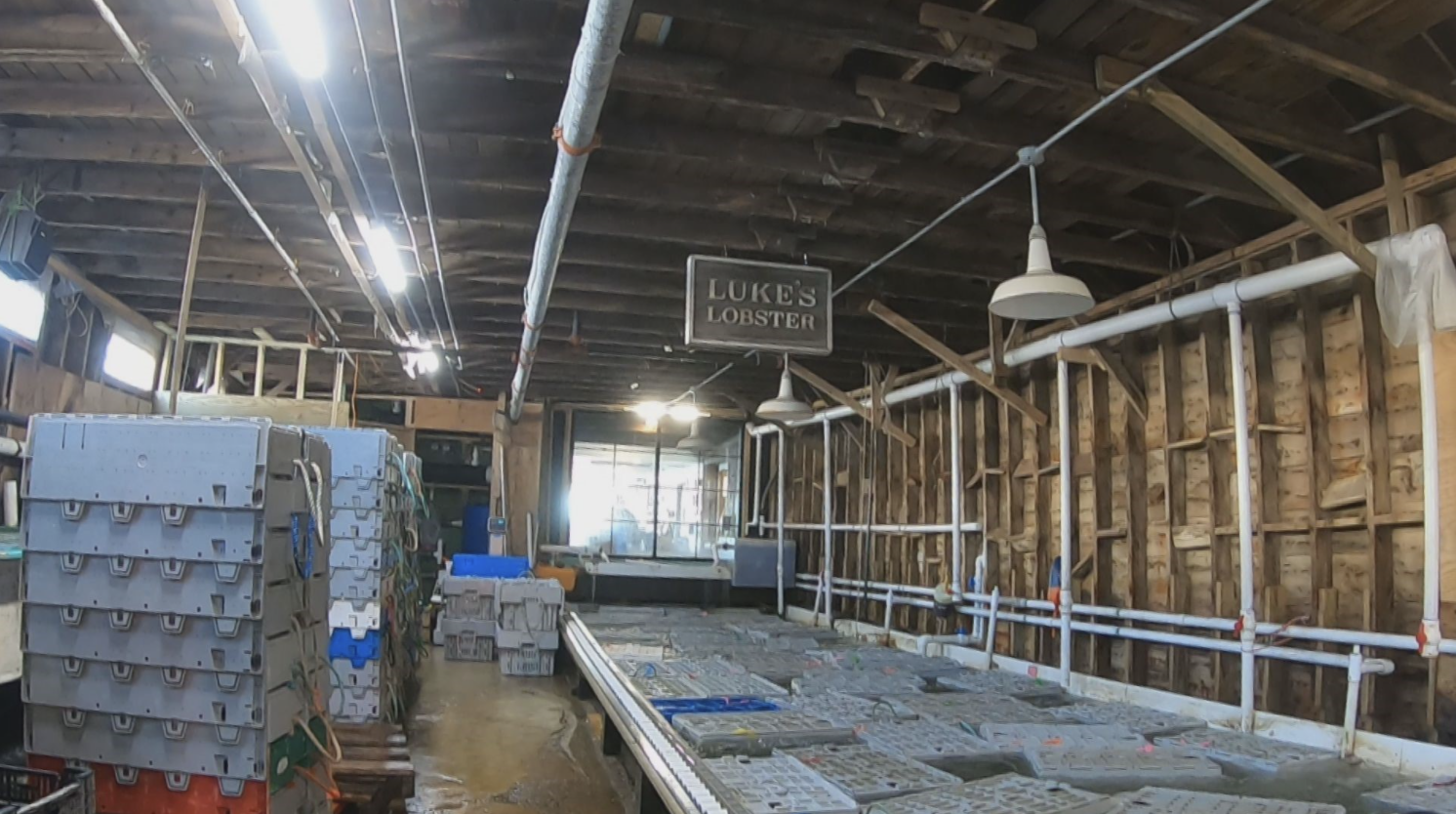 News Center Maine, 11/10/21 – “Maine’s lobster industry has been innovating and adapting for 200 years, Gov. Janet Mills said Wednesday. At a press conference outside of Luke’s Lobster in Portland, she announced a plan that would transform, not just that sector, but the entire seafood industry into the future. Mills’ Seafood Infrastructure Investment Program will provide $10 million in grants to any seafood dealers and processors around Maine to upgrade infrastructure and equipment. ‘The COVID-19 pandemic hit the industry hard,’ Mills said. ‘A range of funding will be offered, including smaller grants for facility improvements and larger grants for capital projects.’ The funding from the governor’s Maine Jobs & Recovery Plan will be awarded in grants starting early in 2022.” 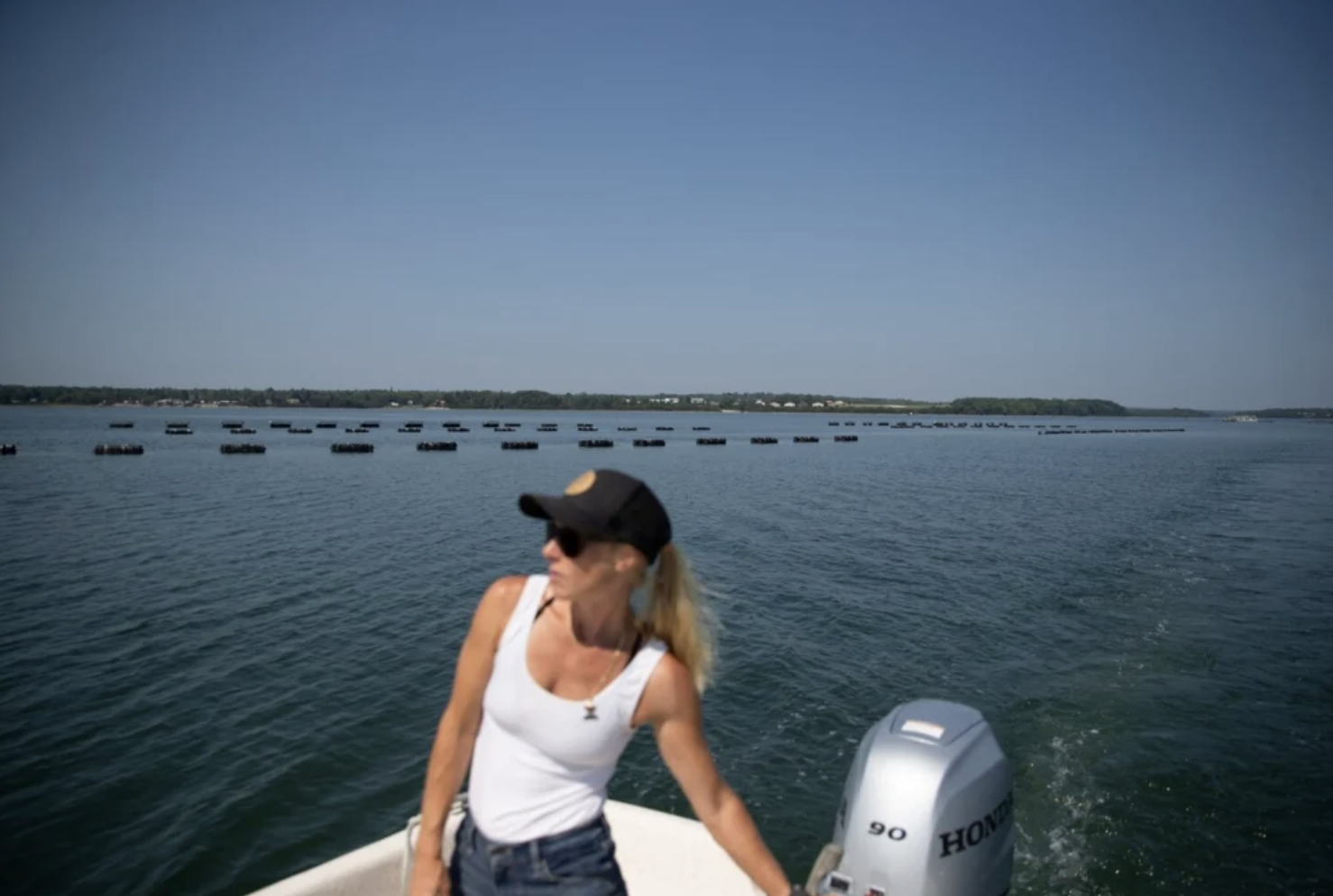 Press Herald, 11/7/21 – “Joanna Fogg, perched at the prow of her boat, looks out at the 350 oyster cages rocking in the Mount Desert Narrows that make up the bulk of Bar Harbor Oyster Co., the business that she and her husband, Jesse, have spent the past seven years building from the ground up. The black plastic floats, spread across about 22 acres, may not look like much to some – and may even be an eyesore to others – but Fogg hopes that one day, people will see them as beautiful. Her farm may not conjure the same quintessential working waterfront images as a lobster boat and brightly colored buoy, Fogg said, but she thinks it should hold the same meaning: ‘This is what it looks like to feed people.’ And feed people she does.” 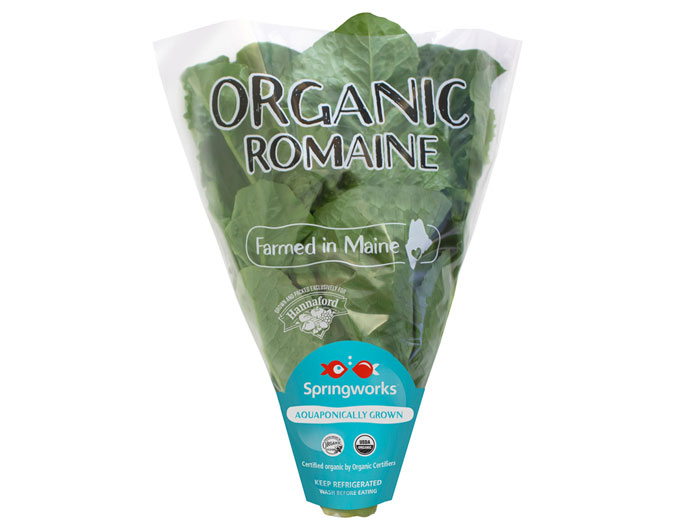 Perishable News, 10/22/21 – “Springworks Farm, the largest and first certified organic aquaponic farming operation in New England, today announced that it is now the exclusive provider of whole head romaine lettuce to Hannaford Supermarkets in Maine, New Hampshire, and Massachusetts. In contrast to lettuce grown in California, Arizona, and Mexico that spends up to six days in a truck, Springworks Farm’s certified organic lettuce travels just 34 miles from its aquaponic greenhouse facilities in Lisbon to Hannaford’s distribution center in South Portland. The savings of nearly 3,500 food miles means greater sustainability for the environment and a higher quality product for Hannaford consumers.” 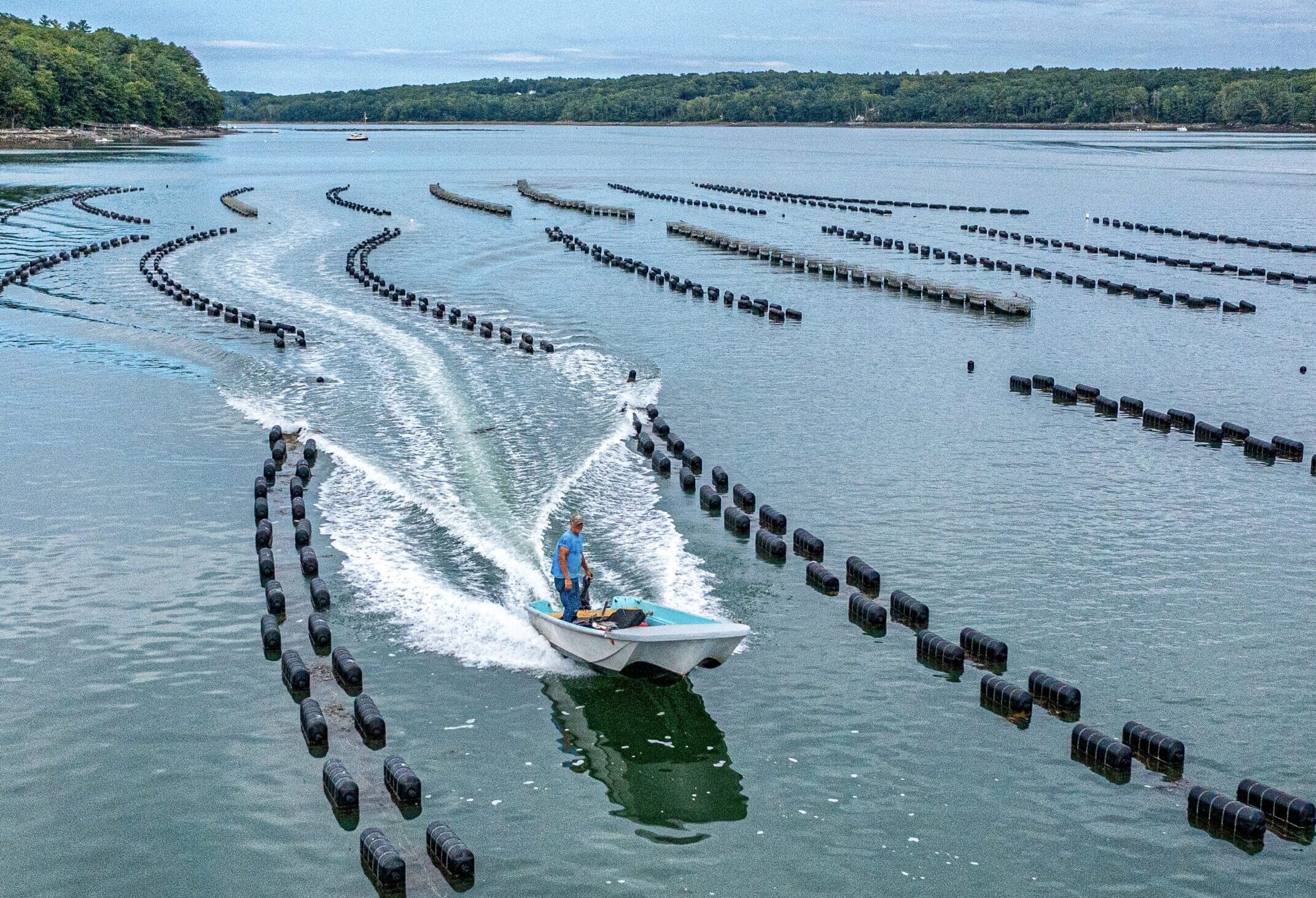 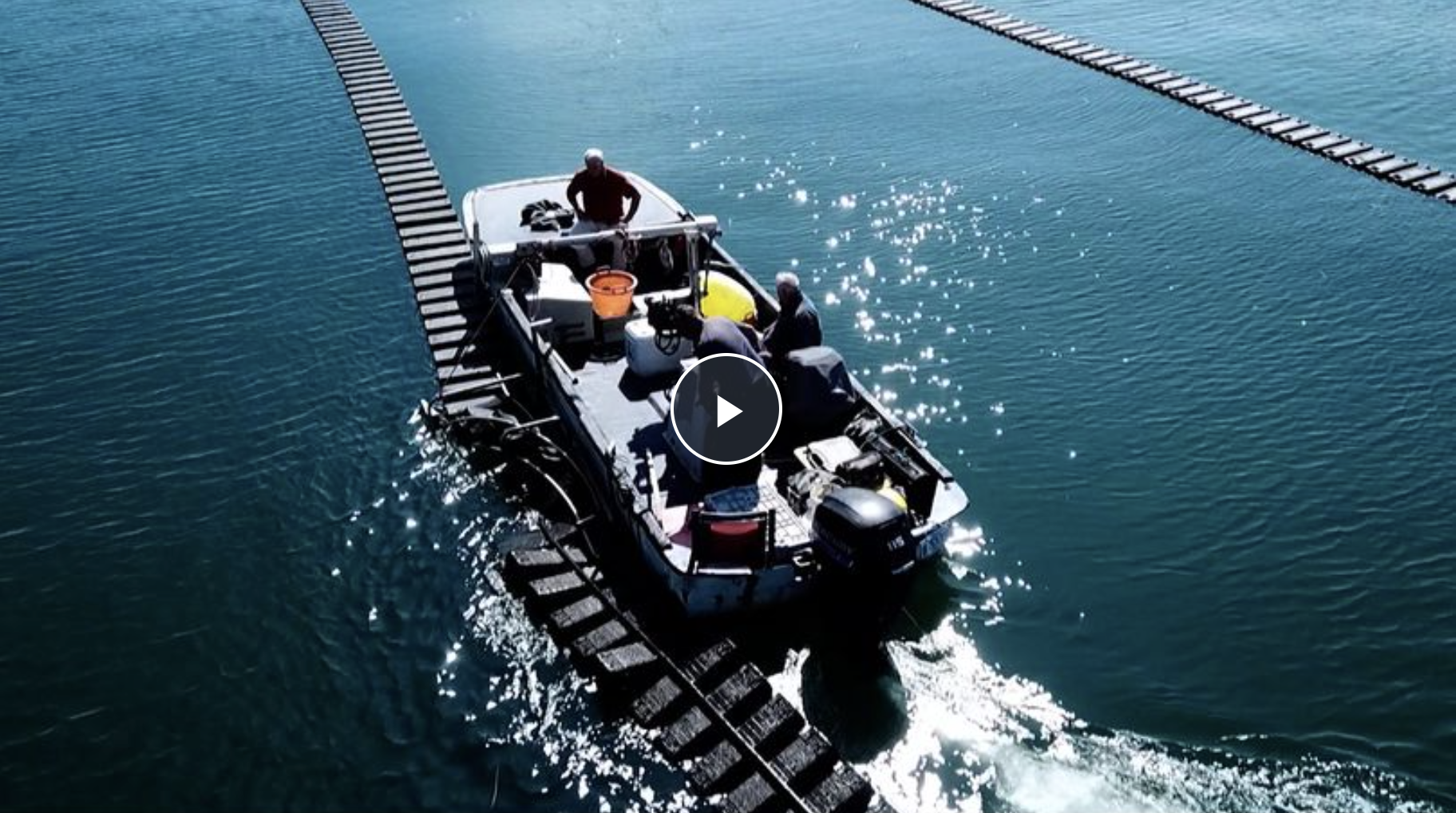 WMTW 8, 10/4/21 – “A Maine oyster farm has installed a new harvesting system that the owner said could help revolutionize the industry. Yarmouth’s Butterfield Shellfish uses what is called the “flip system” to harvest oysters, ‘The reason you’d use this system to grow oysters is because it makes the business model a sustainable business,’ owner Keith Butterfield said. Butterfield said he discovered the “flip system” while in New Zealand. He said it will help oyster farms save significantly on labor. His farm is the first in Maine to use it. ‘This system allows you to stand upright. The baskets are on a swivel. You can open the baskets up without lifting anything,’ Butterfield said.” 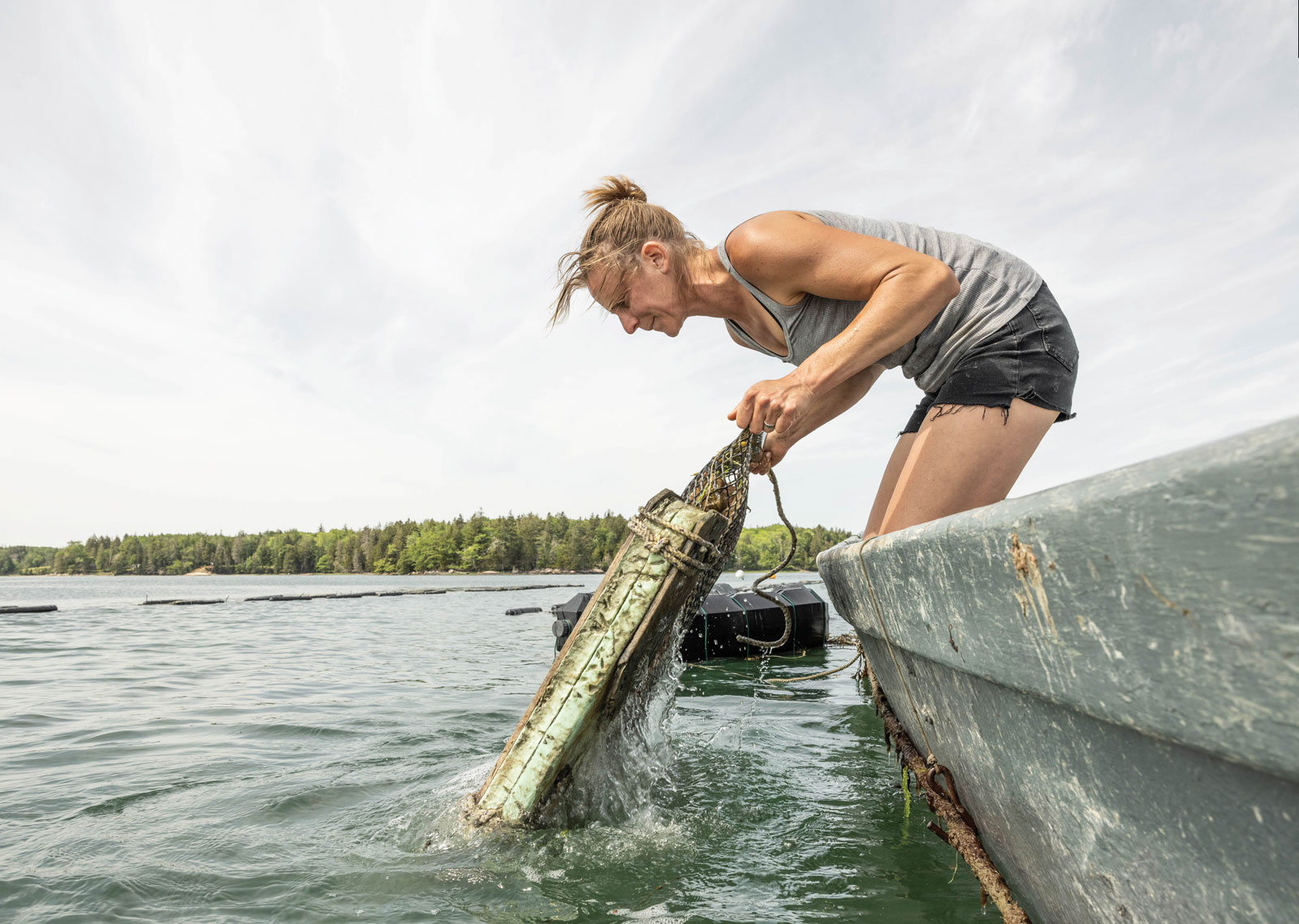 DownEast Magazine, September 2021 – “Today, microplastic pollution is a rapidly emerging field of scientific study and increasingly covered in the popular press — sometimes with apocalyptic overtones. But 10 years ago, when [Abby] Barrows first learned of its existence, there was so little awareness around microplastics that the then-journeyman scientist was captivated by their obscurity. It was like she’d discovered an asteroid hurtling towards Earth before anyone had heard of asteroids. ‘I thought, this is a huge issue that no one knows about,” she says. “I live in a community that relies on the ocean, and no one is talking about this or aware of this — no one even knows what’s happening.'” 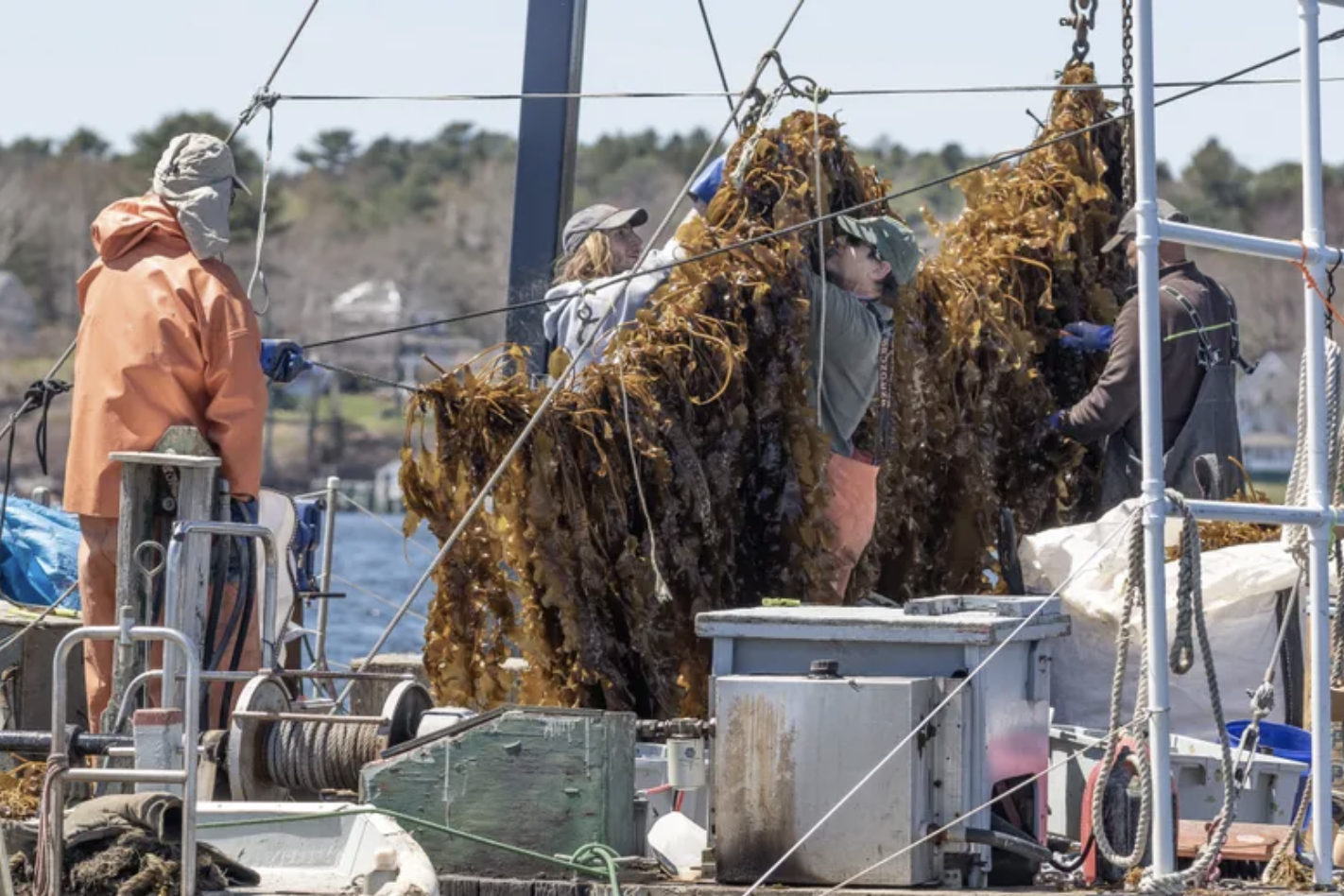 WHY THERE’S NO NEED TO WAIT FOR BLUE CARBON

The Fish Site, 9/28/21 – “Although Maine’s lobster fishery has been healthy for most of the last 20 years, many fishermen were aware that climate change – which may have been partially responsible for the increase in lobster numbers – could also have detrimental impacts in the long term. As more fishermen get into seaweed aquaculture, thanks to the allure of earning money in the winter period when the lobster season is closed, Warner sees Maine’s seaweed farming sector has the potential to grow considerably. ‘It’s not hard to recruit smart, thoughtful people into this, even those that don’t believe in the threat posed by climate change, if you start a conversation about how we can help them make more money. And with more coastline than in California, and super clean and cold water, there’s huge potential to grow the kelp sector,’ Warner reflects.” 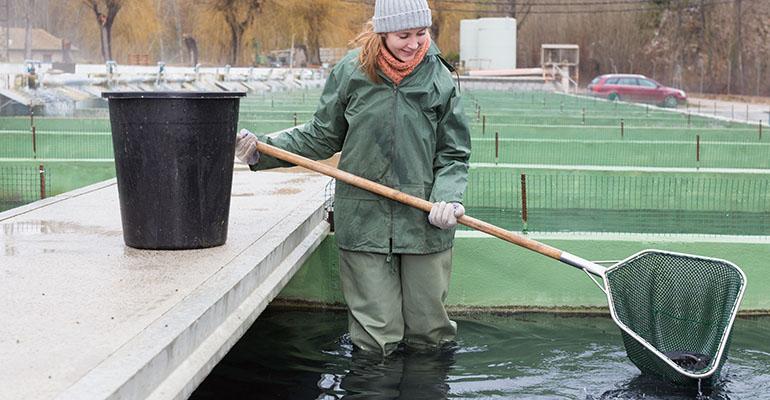 SHE SELLS SEAFOOD SHE RAISED IN HER FISH FARM

New Hope Network, 9/20/21 – “As the population increases, so does the demand for food. Aquaculture, however, might be the fastest-growing category in the food industry. While it might not be obvious, aquaculture also is an industry for women [. . .] Aquaculture includes the farming and harvest of fish and other aquatic organisms, even seaweed, in the oceans as well as inland. In the United States, 75% of seafood is imported, and just less than half of that imported seafood comes from farming. The industry is growing stateside, producing $1.5 billion worth of seafood in 2018, according to Earth Island.” 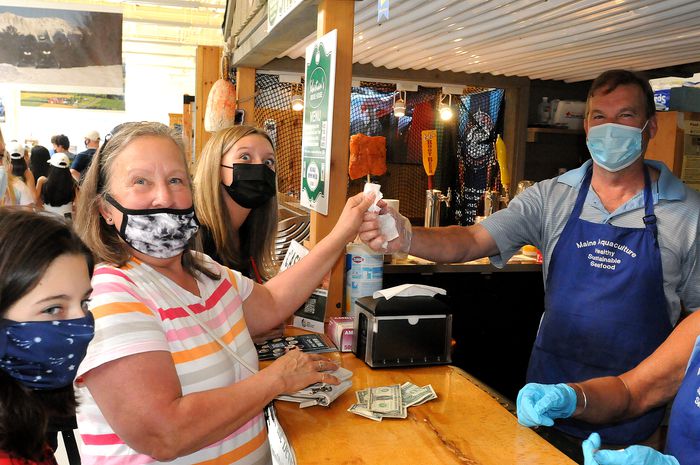 Maine celebrates its agriculture at the Big E

MassLive.com, 9/18/21 – “Atlantic salmon have been swimming up Maine’s rivers for eons. But, due to industrial development and perhaps climate change, today salmon are rather hard to find in the wild. If you talk with Sebastian Belle, he will tell you salmon are plentiful in a place called Cobscook Bay near the Canadian border. The Executive Director of the Maine Aquaculture Farmers Association, Belle said the group represents some 190 farms and generates approximately $100 million in farm gate value. Besides salmon, farmers raise and harvest mussels, oysters and seaweed. Salmon on a stick may not sound especially traditional but for Big E goers it is the best way to experience Maine aquaculture.” 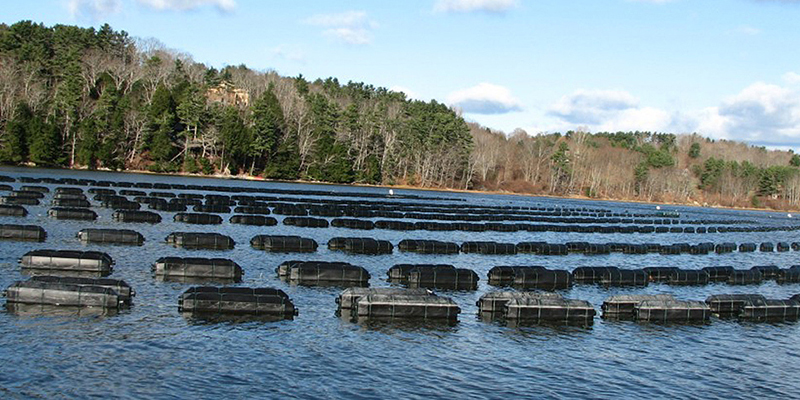 NORTHEAST OYSTERS: AFTER DISASTER LOOMED IN PANDEMIC, ‘MARKETS ARE SLAMMING’

National Fisherman, 9/16/21 – “In Maine, where lobsters often get the limelight, oysters are sizzling away, with the help of new and unique marketing efforts. In mid-June, the Maine Aquaculture Association launched The Maine Oyster Trail, a guide that features 75 oyster-focused or adjacent businesses in the state. ‘One of the farmers on the trail told us they received three inquiries for farm tours within the first week of launch,’ says Afton Vigue of the Maine Aquaculture Association. ‘What we’re seeing is that people are looking for unique, authentic and immersive experiences… and that’s exactly what the Maine Oyster Trail provides.’ Vigue says the new Maine Oyster Trail was inspired by the popularity of the Maine Beer Trail, and she views this type of initiative as an opportunity to grow Maine’s agritourism and aquatourism sectors in unison.”